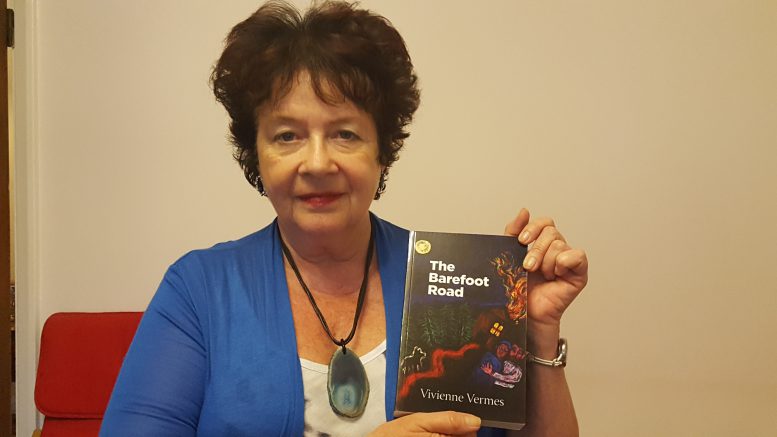 A local writer and actress has penned her first ever novel, about division and discrimination within a Transylvanian community.

Vivienne Vermes, of Westgate Road, is herself of Hungarian and Irish descent. She has published three collections of poetry and portrayed Queen Elizabeth II in the French comedy film Les Profs 2.

The Barefoot Road begins with a young woman found emaciated and unconscious in the mountains surrounding a village in Transylvania. When it is discovered that she is of an ethnic group which was violently driven out of the region many years before, old wounds are reopened.

Vermes said: “The Barefoot Road is set in a village in Transylvania in the past. A young woman arrives of the same ethnic group that was driven out in a bloody pogrom years earlier. The book is about how her arrival splits the village community between those who are accepting of the outsider and those who are hostile and fearful of the unfamiliar.

“I began to write the book long before the current refugee crisis and the rise of nationalism across Europe. I didn’t think that the polarisation that occurs in the microcosm of my fictitious village would be happening so soon on a global scale. It’s very frightening.”

Reviewing the novel, Dawn-Michelle Baude of the Huffington Post, wrote: “The Barefoot Road evinces a poet’s sensitivity towards language and a dramatist’s understanding of plot…This novel stays with the reader, resounding in the daily news where the fear of what is not understood soon transforms into dogmatism and intolerance.”

The book can be bought in The Beckenham Bookshop or purchased online at www.troubador.co.uk.