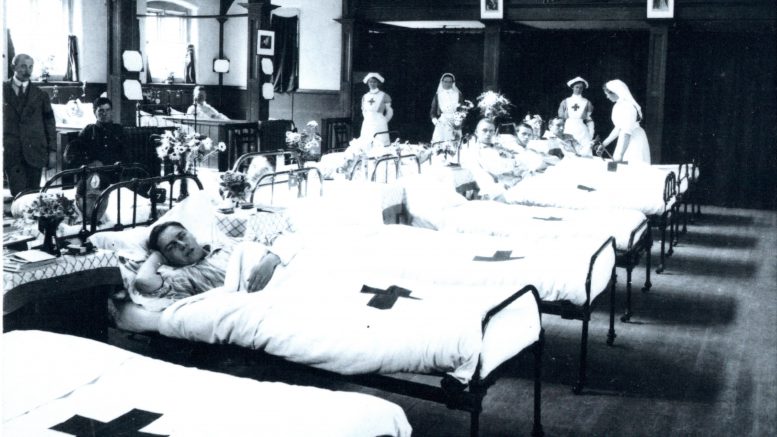 Christ Church Beckenham (CCB) – situated in Fairfield Road just off the High Street – has been an integral part of Beckenham since 1876 and the church has given much to the community in that time.

These ‘gifts’ range from having a military hospital in its halls during the First World War to help heal the wounded and having the church wrecked by a bomb in 1945. And from its first Sunday school in 1886 to its current hosting of well-supported bi-monthly community lunches in the halls on Tuesdays; toddler groups and other events, the church remains a focal point in the community.

Healing is a big part of church life, whether it be spiritual, mental or physical and Christ Church has more than played its part in the past and continues to do so.

In October 1914, during the First World War, the Christ Church Halls were converted into an auxiliary military hospital, with the building lent for the service by Reverend Harrington Lees. It contained 50 beds and the first patients were 22 wounded Belgian soldiers followed by 22 wounded British troops.

The hospital closed two years later but the three halls have continued to be of service to the wider community.

In the Second world War, the church itself was struck by a bomb and had to be rebuilt. But despite this setback, the church continued to serve and be place of healing even though its own fabric needed healing and restoration.

Christ Church Beckenham is not a Sunday-meetings-only type of church. Its facilities are used seven days a week with events ranging from Pilates to men’s breakfasts, community lunches to youth groups, baby and toddler groups and hosting a Beaver colony and Cub pack.

Besides Reverend Hinton, the church’s curate is Luke Bacon, Ed Abernethy the youth minister and Helen Rendell the administrator.