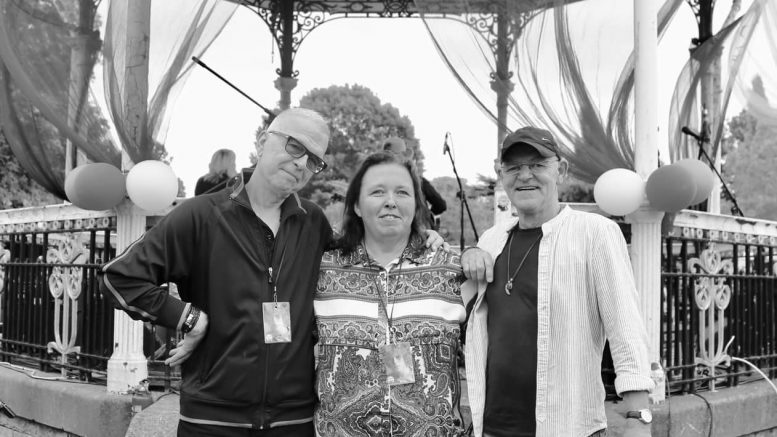 This month saw the return of the Bowie Beckenham Oddity festival which, now in its third year, is aiming to raise funds to restore the dilapidated Bowie Bandstand in Croydon Road Recreation Ground.

Hundreds of fans were joined by David Bowie’s Spider From Mars drummer Woody Woodmansey and his friend, former band member and record producer Tony Visconti, who had not been back to Beckenham since the early 1970’s.

Tony Visconti was at the original festival in 1969 at the bandstand with Bowie where he performed a reggae version of Space Oddity with him. Tony spoke to the crowd on Saturday and has promised to return next year.

Dave Cousins from rock band The Strawbs and photographer Ray Stevenson, who were also at the original festival, attended this year’s event which took place on August 11.

The festival celebrates the life and legacy of David Bowie, his time in Beckenham and beyond. Fans and music lovers celebrated his songs, life and influence, in the park where his rise to stardom began back in 1969.

The event is centred around the same iconic bandstand where Bowie and friends from the Beckenham Arts Lab held the UK’s first Free Festival – The Growth Summer Festival – on August 16, 49 years ago. The festival coincided with the release of Bowie’s first hit single Space Oddity and the day was later immortalised with another Bowie single release, Memory Of A Free Festival.

Wendy Faulkner, who runs Bowie Beckenham Oddity, told News in Beckenham: “It’s fantastic to have all these wonderful people coming to the event and supporting not only our efforts but the festival that pays respect to David Bowie and the festival he organised in 1969.

“I’d like to thank Tony and Woody for their kindness and support shown not only to myself but to the event. Thanks also go out to the musicians, stewards, friends , family and everyone that has donated to the event and of course the public for coming along and supporting the fundraiser.

“We are all playing our part in the fundraising for this iconic bandstand and I look forward to seeing it restored in the future.”

This year’s festival raised close to £13,000 with all proceeds going to the bandstand fund. Despite now raising more than £77,000 the fund is about £45,000 short of its overall target. Despite the significant sum raised so far the council say they won’t begin work on the bandstand restoration until the full amount is met.

Wendy added: “It is a shame that the council can’t start the work on the bandstand now with the money that has already been raised as the roof is in a very poor state. Seeing work being done after all these years  would encourage the public to keep behind the fundraising efforts, but with nothing done since 2013 it hasn’t helped our work.”

“If it was up to me the work would’ve started by now, but sadly I seem to have no say in the plans at all and the council prefer all the work on it being carried out at once.”

The council, for their part, are taking donations and selling personalised bandstand bricks which are available via the council’s website.