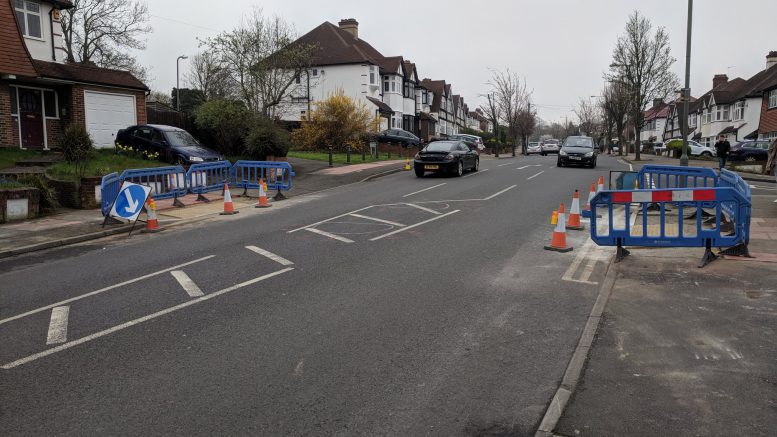 Work has begun on the construction of a refuge island on Village Way following a campaign to improve road safety on what has been described as a “dangerous” stretch of road.

The council agreed to reassess pedestrian safety on Village Way following the death of a motorcyclist in November last year. However local residents and parents of Harris Academy pupils had for many years prior campaigned for safety measures to be introduced.

A petition set up by local Liberal Democrats, which called on the council to install a safe crossing, gathered more than 3,000 signatures earlier this year. The refuge is being built near the junction of Whitmore Road.

Liberal Democrat candidate for Clock House, Adam Bambrough, told News in Beckenham: “The decision to install a central refuge on Village Way is a huge turnaround.  It was only in November last year that the council stated that no crossing was needed as the road was not dangerous, but this shows what can be achieved when the community works together to create positive change.

“The campaign will continue, a central refuge alone is not enough, and we would like to see warning signs installed and consideration given to lowering the speed limit, but for now, we can celebrate a wonderful victory.

“I would like to congratulate everyone who has played a role in our community led campaign to date, especially the parents and students who have worked tirelessly for years to have their concerns addressed.”

Councillor William Huntington-Thresher, executive councillor for environment, earlier stated: “Statistically in terms of accidents, injuries and speeding, Village Way does not stand out as being a ‘dangerous’ road.

“Nevertheless, a pedestrian refuge would aid pedestrians looking to cross the road, including school pupils, parents and other pedestrians and could help reduce traffic speeds in the area where most children cross.”