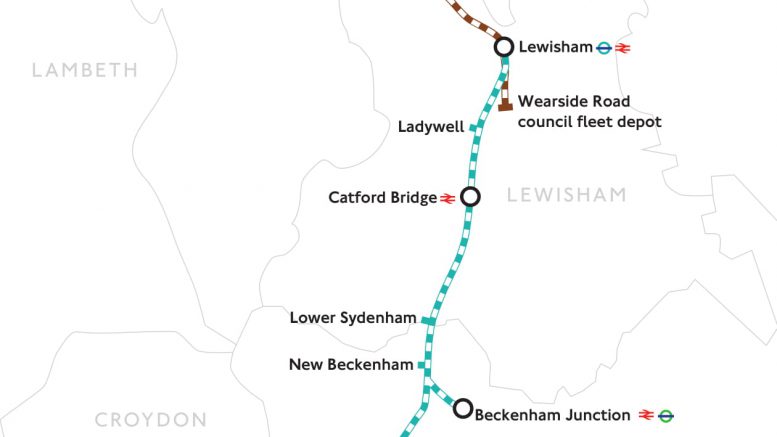 The majority of local residents support plans to extend the Bakerloo line down to Beckenham Junction according to the results of a public consultation conducted by Transport for London (TfL).

The TfL plans focus on extending the Bakerloo line beyond Elephant & Castle to Lewisham, serving Old Kent Road and New Cross Gate. However, the consultation – which ran from 14 October to 22 December – also sought to ascertain the level of support for a further extension beyond Lewisham to Hayes and Beckenham Junction.

The majority of comments submitted were positive or supportive about the proposed further extension (61%). A further 5% were supportive with caveats (for example concerns about a further phase delaying the initial phase, or the potential impact on National Rail services). A total of 19% of comments were negative or in opposition to the proposals with the most common reasons being a negative impact on rail services such as the loss of services to London Bridge and Cannon Street. Alternative destinations were suggested by 5%.

The benefits of such an extension, say TfL, would be a more frequent service and greater capacity. The move would mean modifying platforms at Beckenham Junction to accommodate the new Bakerloo line trains. The Bakerloo line service would be additional to the existing National Rail services which run to London Victoria.

The plans however are not seen as a priority by TfL who, in September, stated that it was “being realistic about what is affordable over the next decade”.

In a more recent statement, TfL noted: “The coronavirus pandemic has had a huge impact on our network and finances. We remain committed to delivering the Bakerloo line extension. This however remains dependent on a viable funding package being put together.

“A commitment from government to support funding for the scheme is essential in developing a funding package. We will continue discussions with the government, whilst being realistic about the funding London could contribute to delivering an extension over the coming years.

“If a decision is made to go ahead with the scheme, and we get the funding, we would apply for powers to build and operate the extension in 2023 with the earliest services running from mid-2030s.”