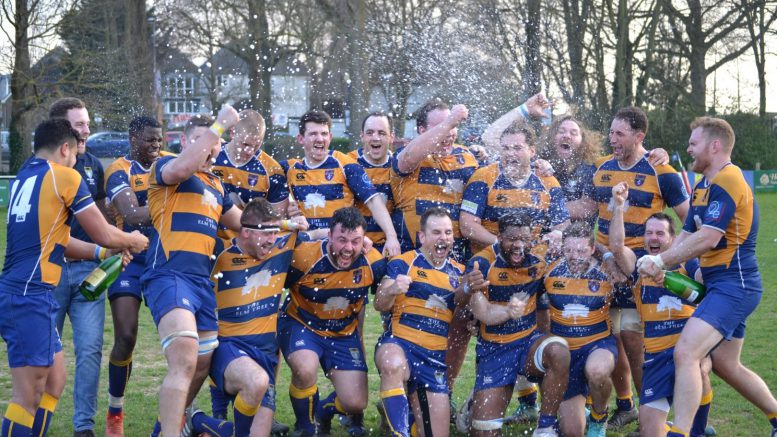 After five years at level seven of English rugby, Beckenham have won promotion back to level six and next season will be playing their rugby in London 1 South.

The league was clinched on March 31 at Maidstone where the Blue and Gold team triumphed 59-0 in a clinical display. This set up a wonderful party atmosphere for the final home game against Gravesend on April 6 where Beckenham registered a 55-12 win to end their outstanding season.

Paul Charlesworth, chairman of Beckenham RFC, told News in Beckenham: “This is a team full of Beckenham boys with all the money floating around in rugby it’s satisfying to win the championship and play some wonderful rugby.

“We’re lucky to have a largely home-grown coaching team of Lovejoy Chawatama and James Cleverly but we’ve imported our head coach from nearby Wimbledon.

“Dan Brown has immersed himself in the club’s proud 125-year history and developed the culture of humility, hard work and honesty.

“The squad have bought into those values and standards and some of that is down to the captain, Liam Markey. Liam leads by example and the squad follow him.

“They were ably marshalled around the park by Josh Burke and Craig Thomson at scrum half with Jamie McDowall and Louis Richards our back line generals at outside half. James Curr, and George Hixson created a formidable centre partnership which created the space and time for Mike Furness, Reagan Tarbie, K K Orelaja, Liam Greene, Ben Petty Josh Parsons and JP Santamaria to wreak havoc with opposition defences.”

In total, the squad won 19, drew one and lost just two of their hard fought games. They scored 825 points playing some scintillating rugby but conceded the fewest (309) showing their determination to hold out in defence too.

The team were also magnificently supported off the pitch too with physios Gabby Weston and Sarah Webb.