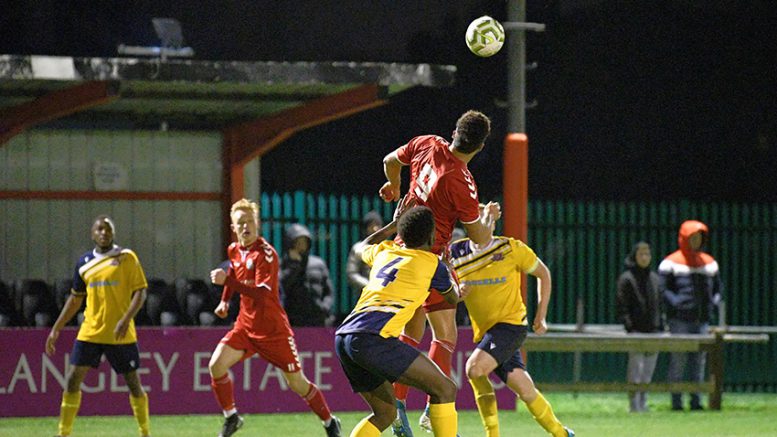 Forward Dominic Ogun scored against his former club in a comfortable 4-0 win as Becks maintained their position at the top of the table. Strike partner Ryan Hall scored the first goal and Steve Townsend played his part with both assists to a pair of own goals. For the spirited visitors it was a third straight defeat and a result that extended their sequence without a win in all competitions to nine games.

In an evenly contested opening an early chance for Ryan Hall went begging when he misjudged his volley. Junior Kaffo then had a free header from a corner but could only direct the ball down into keeper Nic Taylor’s hands. At the other end AFC right-back Kazzeem Richards drilled a left-footed shot just past the near post and Joe Nwoko unleashed a right-footed drive that was comfortably saved by Becks keeper Michael McEntegart.

The Rams defence struggled with low crosses and after Hall went close again, Ogun then spurned a glorious chance from ten yards out. Skipper Luke Rooney pinged the ball out to the left for Hall who proceeded to whip it in for the arriving Ogun. Unfortunately, he smashed his shot over, wasting a great move from the home side.

But it wasn’t long before Becks finally capitalised. An early delivery from recently signed centre-half Ben Gorham from just inside the Croydon half made its way through a crowded box to an unmarked Hall at the far post who tucked it home from four yards out for his tenth goal of the season. Becks then doubled their lead inside two minutes. Rooney again sent the ball diagonally, this time out to Steve Townsend on the right. His low cross looking for Hall was instead turned into the top corner of his own net by Athletic’s centre-half Hermes Mengi as he attempted to clear.

At half time Becks had a deserved two goal cushion despite not being at their best.

The second half was a fairly balanced affair for the first ten to fifteen minutes with neither side creating anything clear-cut. For the most part, Becks were content to control the midfield but, through a good move involving left-back Jamie Brown and Townsend, they did create a chance for Ogun who again failed to produce the finish. Taylor then saved a Harvey Brand header from the home side’s final corner of the night in the 58th minute. At the other end striker Joe Nwoko got the ball stuck in his feet when well placed before full-back Richards blazed just over.

Referee Kennedy Kikulwe was then involved in couple of controversial incidents. The first saw Hall’s clever ball split the heart of the Rams defence releasing Ogun who took the ball past the oncoming goalkeeper with his first touch – before tumbling. Clearly clipped, it appeared an obvious penalty to everyone except the referee who instead awarded a goal-kick. Then with ten minutes to go a third goal finally ended the game as a contest. Having stopped play for a head injury, Kikulwe awarded Beckenham an uncontested freekick. Hall played the ball forward but as Croydon’s defenders left it anticipating they were being gifted possession, it was too short for – the now hobbling – Taylor and Ogun leapt upon the chance with a composed finish.

In the final minute Townsend earned his second assist to a Rams own goal when his ball across the six-yard box was deflected in by the despairing lunge of full-back Michael Jones. The win meant that Becks remained two points clear of Corinthian (who won 10-0 against struggling Erith & Belvedere) at the top of the table having played one more game. The leaders visit mid-table Welling Town on Saturday (07/03).

Becks coach Phil Wilson said afterwards, “Pleasing performance. A 4-0 win at home. You’d take that. They’ve got some good players and I’m surprised they’re not higher up in the league. Joe Nwoko worked really hard and they have a lot of pace coming from midfield. They looked quite dangerous on the break.

“New signing Ben Gorham has come in and we’ve had two clean sheets with him playing at the back. He does the no-nonsense stuff really well but he’s also got that bit of quality. I think Ryan Hall’s work-rate since December has been second to none. He’s a great example for the boys in the dressing room and his quality tonight was on point.”

AFC Croydon Athletic manager Kevin Rayner added: “The scoreline flattered Beckenham a little bit. We competed well enough. We just lost concentration with two quick goals in the first half. But I thought we played quite well, certainly better than our last couple of games.”