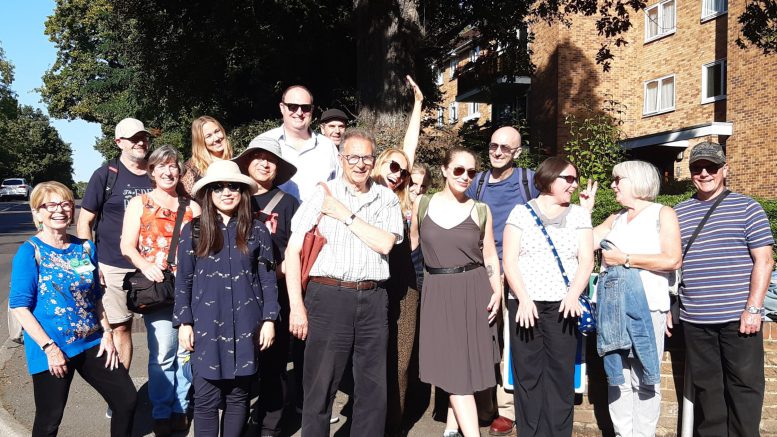 Beckenham’s own David Bowie walking tour is celebrating its third anniversary and is marking the occasion by offering one lucky winner a special Bowie-themed overnight stay.

In Ziggy’s Footsteps, which is run by Bowie enthusiast and long-time Beckenham resident, Kat Webb, is running a free prize draw for one lucky winner to win an overnight stay in a 1970s/80s David Bowie themed room on the Kent coast.

Kat, 54, said: “It’s been a dream of mine to do this tour for over 15 years. I love showing people around my hometown and telling them all about all the amazing stories where Bowie lived.”

Bowie moved to Beckenham in 1969 where he lived for more than four years, leaving as an international star. The guided walk visits the main locations where Bowie and the Spiders lived, performed, and spent their day-to-day lives.

Stops along the walk include Haddon Hall where David Bowie dreamed up his famous Ziggy Stardust persona, visits the site of the famous Beckenham Arts Lab at the Three Tuns, and ends at the Grade II listed Bowie Bandstand in Croydon Recreation Ground, where Bowie put on a free festival in the summer of 1969.

Ticket holders will be entered into a free prize draw to win an overnight stay in the David Bowie themed room at the newly opened Twentieth Century Art Deco B&B in Birchington-On-Sea, Kent.

The Bowie room is decorated with artwork from his early career, along with a 1970’s space-age plastic modular double bed, transporting you to the Ziggy Stardust era when he performed in nearby Margate.

For tickets and more information on the David Bowie Walking Tour, visit www.inziggysfootsteps.com.