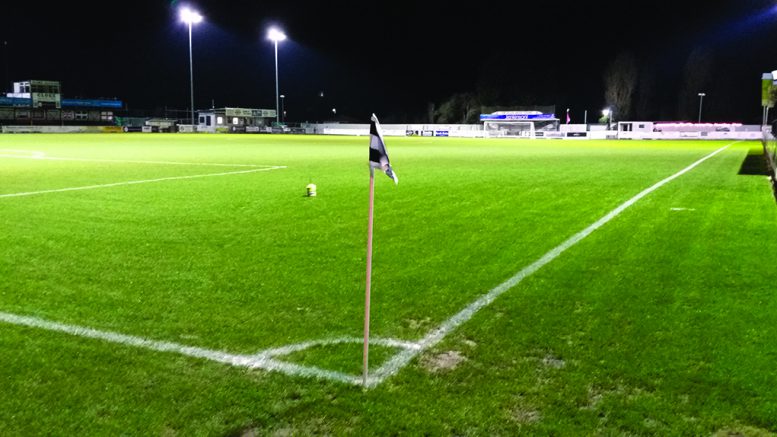 Having been knocked off top spot for the first time in four months the previous weekend, Becks responded by winning away at Deal Town. On a cold Tuesday night it wasn’t always pretty – with genuine chances at a premium. But an early goal from Kiki Oshilaja and another in stoppage time from Steve Townsend were enough to secure all the points as The Reds moved back to the SCEFL Premier Division summit. Sometimes you have to win ugly.

Kick-off was delayed by fifteen minutes due to the logistics of getting a team the eighty miles or so from Greater London to the Kent coast in midweek amidst poor weather and traffic congestion near Dover.

However, the pre-match downpours hadn’t dampened the enthusiasm of Reds left-back Archie Johnson. Inside five minutes a surging run took him past two challenges before he was crudely upended just outside The Hoops area. The resultant free-kick saw captain Luke Rooney strike the base of the post with teenager Kiki Oshilaja quickest to react, prodding the rebound home from close-range to help settle any early nerves.

Becks had switched to a 4-4-2 with new signing Ben Gorham immediately slotting into the heart of defence alongside Mudiagho Wanogho and Junior Kaffo leading the attack – an energetic whirl of arms and legs in, for him, an unorthodox centre-forward role.

Whilst solid in defence – where their centre-halves barely put a foot wrong all night – the hosts looked bereft of invention in the final third and it was not a surprise to overhear Charles Ground regulars bemoaning their team’s attacking woes and poor deliveries at set-pieces.

The pitch deterred sharp passing but late in the half The Reds (almost) produced the most incisive move of the night. Oshilaja, playing at right-back, picked up possession and intelligently found Rooney thirty yards out. His threaded through ball split the Deal defence but had just a fraction too much on it to find Townsend’s clever dart – instead running through into the grateful arms of James Tonkin in the Deal goal.

After the break Deal assistant manager Steve King cut an increasingly frustrated figure – at one time seeing the cherub-faced referee pause play in order to speak with him at length on the sideline.

While the score was 1-0, there remained the risk that Deal might conjure a goal from somewhere and just four minutes from time they almost did. A long throw-in from wing-back Jack Paxman caused chaos in the Beckenham area and keeper Michael McEntegart did well to stand tall and – with a little help from his near post – deny Deal’s Alfie Foster an improbable equaliser from an acute angle.

By this stage Becks had brought on Ryan Hall, replaced Kaffo up front with Ashley Carew and replaced Bertie Valler (who’d been clutching his lower back after a particularly heavy landing) with young Billy Martins.

Deep into added time the ever-willing Townsend chased one last lost cause and this time he got lucky, wrestling possession from Tonkin on the edge of the area before strolling across the six-yard line for the easiest of finishes into the now unguarded net. Elated, he then raced to the corner and was soon joined by a mass of red shirts. The visitor’s relief was palpable.