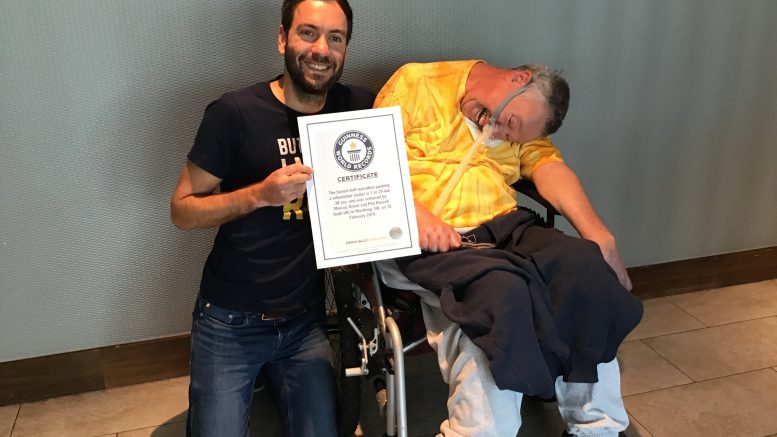 A former languages teacher from Beckenham who was diagnosed with motor neurone disease three years ago has, with the help of his good friend, broken the Guinness World Record for the fastest half marathon wheelchair push in history.

Phil Rossall, 66, who was formerly head of German at Langley Park School for Boys, and Marcus Green, 33, received official verification from Guinness World Records for completing the race in an astonishing one hour 29 minutes and 38 seconds – knocking nearly six minutes off the existing record.

Phil, who only expected to live one or two years following his diagnosis, is totally reliant on a ventilator for breathing. Since then, he has gone on to raise more than £28,000 for the Motor Neurone Disease Association.

Marcus, who himself suffers from Crohn’s disease, braved the rain and strong winds to push more than his body weight for 13.1 miles.  A member of the Winchester and District Athletics Club, Marcus wanted to highlight the good work the charity ForCrohns does to support sufferers.

The pair, who share a love for running, first met when they were working at Age UK. Phil, who still works for Age UK from his home in Orpington, had previously been a marathon runner himself and he wanted to show that you are never too old or too ill to achieve something amazing.

Marcus said: “We wanted to challenge ourselves and at the same time raise awareness of the great work our charities are doing.”

Phil said: “All I had to do was just sit there, keep breathing and let Marcus do all the work. Mind you, I did cross the finish line first!”

They both received fantastic support on the day from friends, family and the organisers of the Worthing Half Marathon. The pair added: “Special mention must go to Nick di Paolo, who had the unenviable task of keeping up with the record pace whilst carrying Phil’s spare ventilator weighing about five kilos. Also, to videographers, Jonny Green and Hannah Walker.”

Steve Parsons, headteacher of Langley Park School for Boys, told News in Beckenham: “Although I don’t know Phil personally, several of my colleagues worked with him and remember him very fondly indeed. I am told that Phil is a true gentleman and had a reputation as a superb teacher in his time here.

“We have been following the news of his fundraising for some time and it comes as no surprise that he has achieved such a remarkable feat. Our congratulations and best wishes go out to him.”