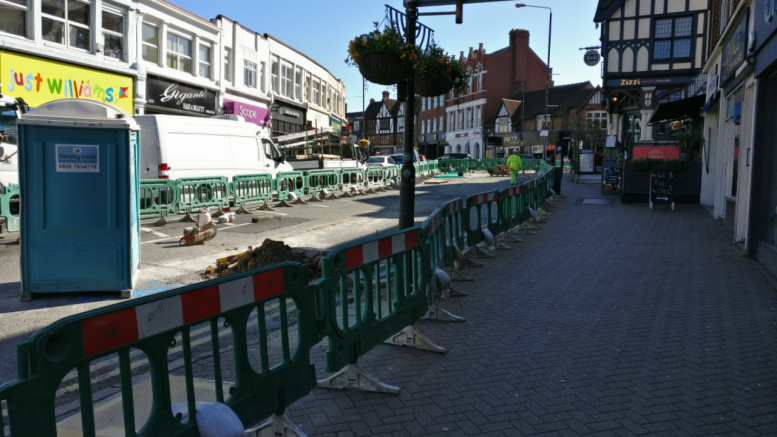 The following update has been provided by Conway who have been carrying out the improvement works on Beckenham High Street.

TFL have advised that…

– Kerbing has continued to The Drive whilst the paving has almost been completed.
– The wall outside Beckenham Junction station has been rebuilt.

Thames Water has reported a water leak outside Superdrug. The repair will require new paving to be dug up by Thames Water and then reinstated. The project team recognise the frustration this further disruption may cause however it is beyond our control.

The project team are aware that having to divert pedestrian access on to rough granite setts parking areas has been uncomfortable for some residents. However, this has been necessitated by maintaining access to shops during opening hours.

– Footway and kerbing to The Drive will be completed.

– On Beckenham Green the entrance bollards will be removed and further temporary resurfacing will be laid in preparation of the final resurfacing.

– Preliminary work starts outside Lidl and working towards the junction of Kelsey Square with The High Street.

– From Monday the 30th of April we will be banning the left hand turns from Village Way onto the High Street and Kelsey Square onto the High Street. The right hand turn from The Drive onto The High Street will also be restricted. All traffic will be sent on the main diversion along the High Street heading towards Beckenham junction then onto Rectory Road. This is likely to be in place until the end of the project to allow the contractor to work safely in those areas.

– From Monday 14th of May the section of High Street between Bromley Road and Manor Road will revert back to two way traffic. At the same time there will be traffic changes to Burnhill Road and Kelsey Lane, residents in these affected roads will be letter dropped shortly with a further update.