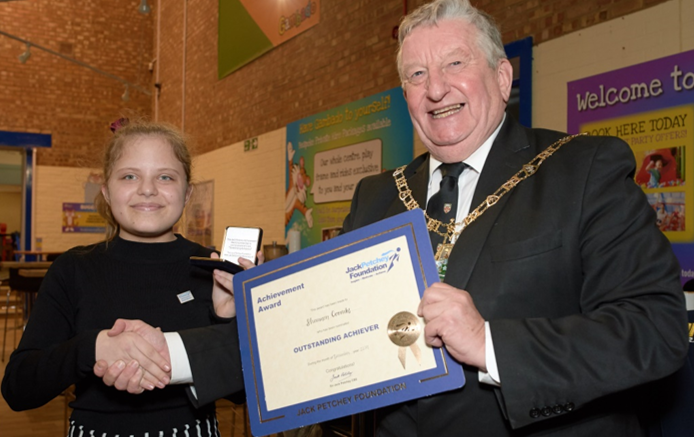 A 14-year-old girl with ongoing complex medical needs, who has received support from a local charity, recently won a prestigious award for overcoming challenges and inspiring those around her.

Shannon Coombs, supported by local charity The Maypole Project, was awarded the Jack Petchey Achievement Award for displaying courage and determination despite daily health and personal struggles and having a profound effect on those around her.

Formed with foetal complications, Shannon’s mother Nikki was advised after giving birth to prepare for the loss of her new baby. However, with the intervention of pioneering surgery over the first five years of her life, Shannon survived, though with complex medical needs and has been hailed a “miracle baby”.

The Maypole Project, a South London charity supporting families with children with complex medical needs has been a major source of support for Shannon and her mother for many years, with mother Nikki stating that the charity has “become such an important part of [their] lives.”

Shannon’s ongoing needs have made school life difficult but at The Maypole Project Shannon is able to interact with peers in a safe and inclusive environment. This space has given Shannon a boost in self-confidence and some amazing childhood memories.

Shannon’s ability to positively influence those around her led to multiple people nominating her for the award. The nominators described Shannon as someone who has “had to deal with a lot at an early age… [but] remains optimistic” and “always puts on a brave face.” They went on to add that “even on [Shannon’s] dark days she is kind and always ready to help…Shannon’s courage is an inspiration to young and old.”

The Maypole Project is participating in the Jack Petchey Achievement Award Scheme to recognise outstanding young people who either volunteer for the charity or use their services. The award can be used to recognise a personal triumph for young people who have faced a challenge or who have pushed themselves outside of their comfort zone.

Shannon was presented with the award by the mayor of Bromley, Nicholas Bennett, and will receive a £250 grant.