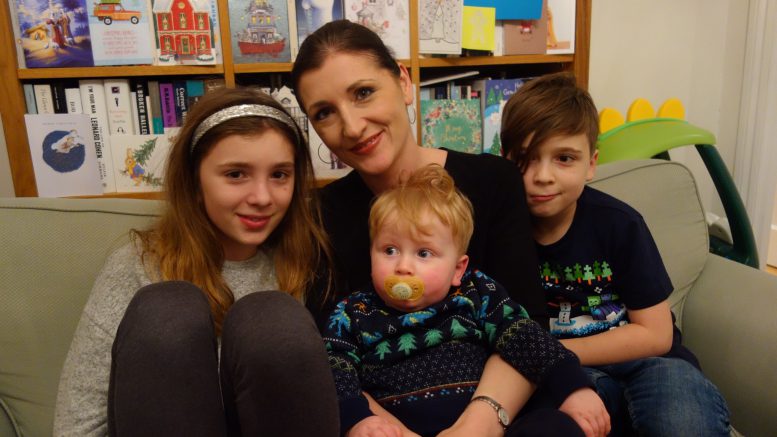 A Beckenham mum who needed 16 units of blood after suffering a ruptured uterus during childbirth is urging more men to help save someone’s life by donating blood.

Kirsty Armstrong, 39, knows how important it is to receive blood and is supporting the NHS Blood and Transplant campaign which calls for more men to start donating in South East London.

Recently released figures show that only 45 per cent of the active blood donors at the capital’s three donor centres are male. Nationally, the number of male donors has also been falling.

Kirsty’s life was saved by 16 units of O negative blood after she suffered a massive bleed during the labour of her third child, Michael. Her body went into hypovolemic shock where her blood pressure dropped and she struggled to stay conscious.

Michael was safely delivered by ventouse but Kirsty was rushed into emergency surgery, where she received the blood transfusions.

Kirsty said: “It was the most excruciating thing I have ever experienced; I have never felt pain like it.

“It was a harrowing experience and I am so grateful to be alive. I am incredibly grateful to all blood donors for their generosity, without which I wouldn’t be here.”

“It is a shame I can no longer give blood myself, but I hope my story inspires people to start saving lives by registering as a blood donor.”

Donors of every gender are welcome, and blood types are not gender specific. However there are two factors which make a strong number of male donors essential for a safe and efficient supply of blood to hospitals.

Men generally have higher iron levels than women, so they are more likely to be able to donate on any given day. Donors with low iron levels cannot donate to protect their own health.

Men also do not make new antibodies, which are part of the body’s defence system, during pregnancy. That makes it easier to match their blood to patients, and also easier to use their blood in products such as plasma and platelets, which are used for patients with cancer, major blood loss, burns injuries, and more.

“Men are more likely to be able to donate, and able to help more patients with each donation, so we need a new generation of young male donors, to ensure our donor base is strong enough to keep supplying lifesaving blood to hospitals.

“We can assure men that out there that blood donation is an amazing experience that you can feel proud of. We need men to start their own blood story.”

To become a blood donor or find out more visit www.blood.co.uk