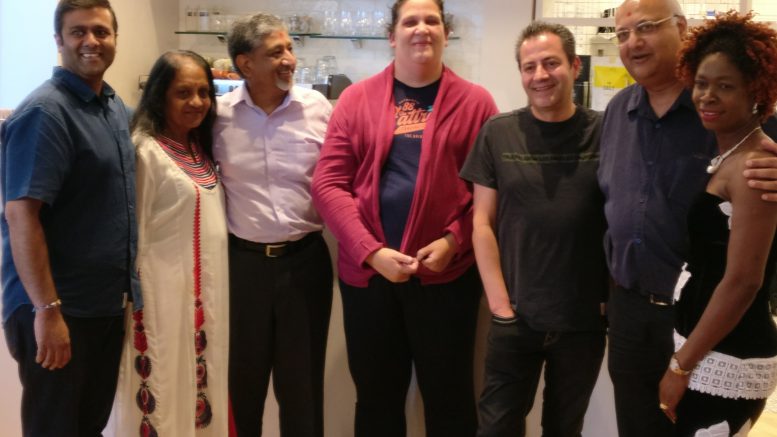 The inaugural event, which took place on Sunday, September 16 at new High Street restaurant Eatwell, saw a range of community figures come together to celebrate the achievements of local shopkeepers and recognise those who go above and beyond.

The Best Beckenham Shopworker competition was organised by those who run the Beckenham Appreciation Group Facebook group.

More than 700 votes were cast over a five-week period which saw 36 nominees eventually whittled down to four finalists.

Overall winner John Quintero, whose butcher shop is located close to Eden Park station, was joined by fellow finalists Rajesh from Brandon’s Newsagents – which is located on Croydon Road and Kat Flemming from Sainsburys. The fourth finalist, Mark Foster from M&S, was unable to attend.

Speaking to News in Beckenham after receiving his award, John said: “It’s absolutely amazing. Little things like this make such a huge difference and I am so grateful to everyone who voted for me. It’s all quite overwhelming.

“The way I was brought up, to try and help others and to go that extra mile for people is the example I want to set my children. I love people and it’s the reason I do what I do. It’s not all about making money. It’s about being helpful, having time for people and doing what you can for others.

“I am so very happy and I never could have imagined the support and recognition we have received. It’s so great, particularly as the shop has been going for just two years.”

Talented local singer Lola Young, who is just 17 years of age, performed a few of her tracks before the results were announced. Winner of the 2016 Open Mic UK finals Lola also featured in the hit TV series ‘Got What It Takes’ and was the support act on Lucy Spraggan’s recent sell out UK tour.

As well as the live music, a dozen or so local sponsors donated prizes, which included gift vouchers from ATO-Tours; baby clothing from Baby Haute Couture; bottles of wine and prosecco; a free dinner for two at Indian restaurant Chokha, and many more.

Jackie Andrews, who helped run the event and is one of the founders of Beckenham Appreciation Group, said: “The event went really well. It was lovely to see so many people and everyone has been so enthusiastic. We would definitely like to make this an annual event which helps to recognise the work of these brilliant people.”