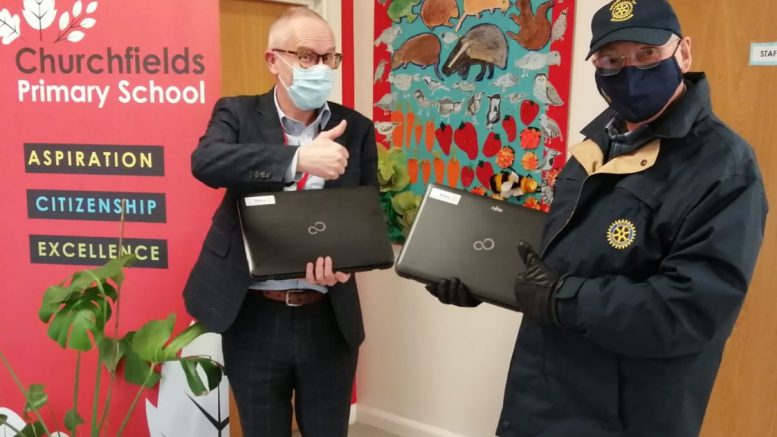 Rotary Beckenham has provided more than 50 laptops in recent months to local primary schools, for use by children who are now learning online from home.

This is an ongoing initiative for the club, who say they will continue to source and deliver laptops, for as long as the need exists.

The idea came about when Rotarian Peter Braithwaite read an article in the press about a national shortage of school laptops and decided this was something his Rotary club could help with. Local primary schools were contacted to establish that the need existed and then appeals were launched for unused laptops.

After a surprisingly good response to the appeals, Rotarian Christopher Bird checked that each donated laptop was working properly, then wiped clean any data remaining in the storage, gave a final clean and fixed a Rotary sticker to the case. The refurbished Windows 10 laptops were ready to start a new life, being put to good use by local school children having to learn online at home.

This project has only been made possible thanks to the generosity of local residents and organisations, who provided their unused laptops for this cause.

Anyone wishing to donate an old or unused laptop should contact Peter Braithwaite at: peter.braithwaite45@gmail.com

The wild swimming lake at Beckenham Place Park is due to open next week when government lockdown restrictions on organised sports are eased... ... See MoreSee Less

Wild swimming lake to reopen next week – News in Beckenham

The wild swimming lake at Beckenham Place Park is due to open next week when government lockdown restrictions on organised sports are eased.
View on Facebook
· Share