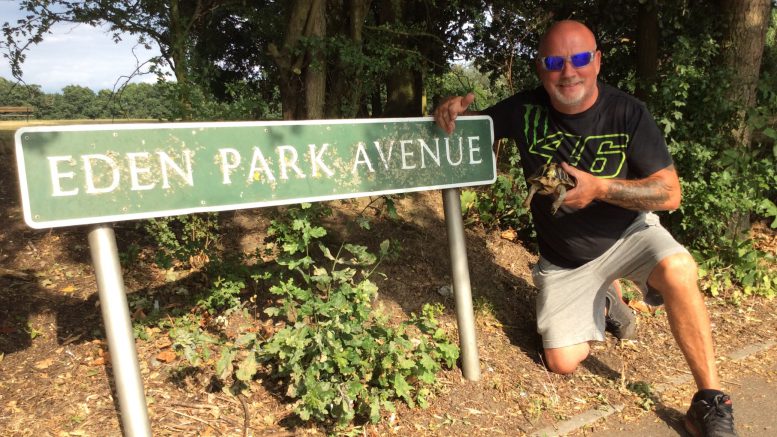 Rossi the tortoise was found wandering along Eden Park Road

A runaway tortoise which was found wandering along Eden Park Avenue has been safely reunited with its owner.

Rossi was distinctively marked with the number 46 – his owner’s tribute to the world champion grand prix motorcycle rider, Valentino Rossi. After investigations locally and on social media, the travelling tortoise was finally reunited with his owner Tony Lock who lives nearby.

Councillor William Huntington-Thresher, executive councillor for environment and community services, said: “It’s great news that our detective work has paid off. We are very aware that pets are members of the family too, and how devastating it is if they go missing.

“Any help we can give is worth it, which is why we also try to offer some sort of closure to the owners of deceased, un-microchipped cats our street cleaners occasionally find.”

Mr Lock, who is now considering getting Rossi microchipped, added: “Rossi escaped from the garden and was legging it along the main road – anything could have happened. In a way, Valentino Rossi helped reunite him with me because the ‘46’ transfer on Rossi’s shell, the number of the motorcycle Valentino rides, helped identify him.

“I’m so glad he was rescued and I can’t thank everyone enough for looking after him and helping me find him.”