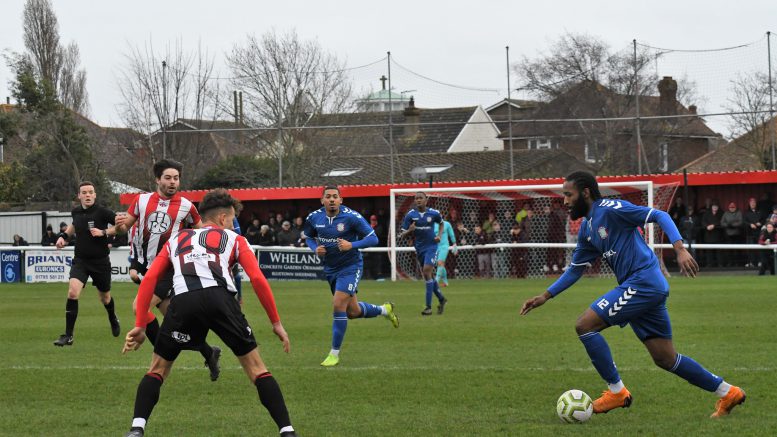 Becks suffered their heaviest league defeat of the season going down 4-1 at a windswept Holm Park. In front of a raucous crowd of 401, talismanic Ites skipper Dan Bradshaw notched a hat-trick as Beckenham were knocked off top spot for the first time since October.

The visitors started brightly and inside sixty seconds left-winger Steve Townsend looped a header just over. In a hard-fought contest, Sheppey right-back Callum Emptage had to be replaced by Chris Edwards after just eight minutes. Just four minutes later the home side took the lead – and it was a goal fashioned by two former Reds. Overlapping left-back Greg Benbow whipped in a deep cross that wasn’t dealt with and when the ball fell to Billy Bennett 15 yards out, he took a touch before hitting a drive that Michael McEntegart did well to parry. But the Becks defence was slow to react and it was arch-predator Bradshaw who seized on the rebound, nipping in for the simplest of finishes from just four yards out.

Sheppey now enjoyed a good spell with winger Harrison Carnegie forcing a save before heading wide. Their best chance came on twenty-five minutes when an error by Kiki Oshilaja allowed Bennett to slip in Bradshaw only for the league’s leading scorer to uncharacteristically lash his effort over the bar.

Becks were now toiling in the swirling conditions with both Townsend and right-winger Stefan Cox ineffectual and target man Dom Ogun – making his first start since recently signing from AFC Croydon Athletic – unable to make the ball stick with either head or foot. Their best chance came a minute before the break when all-action right-back Harvey Brand burst forward only to shoot just wide at the second attempt after his initial effort was blocked.

Having introduced Shameek Farrell for Townsend at half-time, Beckenham started the second half positively. On fifty-one minutes skipper Luke Rooney – very much the afternoon’s pantomine villain as far as the Sheppey fans were concerned – played in Ogun only for the burly striker to get caught in two minds and fluff his lines, heading tamely into the grateful arms of United keeper Josh Pelling. In truth, chesting down before shooting or attempting to head over the advancing keeper both appeared better options.

A minute later the home side doubled their lead. Bennett fed Danny Leonard and his ball inside allowed Bradshaw to force another save from McEntegart. But with left-back Archie Johnson failing to clear, the ball instead fell to Leonard who made no mistake from eight yards out. It was the former Herne Bay winger’s 19th goal of the season.

To their credit Becks dug deep and responded. On fifty-nine minutes the skilful Cox cleverly released Ogun and having timed his run to spring the offside trap beautifully, he cut back onto his left before a composed finish saw him slip the ball under Pelling for his first goal for the club.

Becks were in the ascendency now and with the home crowd suddenly hushed, Sheppey’s players were visibly rattled. The turning point came when Farrell played in Brand whose touch took him past a defender and into the area for what appeared surely to be the equaliser. But arriving simultaneously, it was Ogun whose disappointing effort was instead kept out by Pelling’s legs. Chance gone.

On seventy-one minutes the gig was finally up when Sheppey added a third via a clinical counter-attack. Substitute Jordan Wright weighted a sublime pass perfectly into the path of Bradshaw who allowed the ball to run across him before unleashing an angled drive into the corner from just inside the box.

Wright then shot wide after good work from Bennett before an error by Joe Bannan thirty-five yards out gifted Sheppey their fourth twelve minutes from time. Having seized on the error Bradshaw raced clear to complete his hat-trick with a deft dinked finish, despite a desperate attempt to salvage the situation by substitute right-back Bertie Valler. It was Bradshaw’s 45th goal (all competitions) and his fourth hat-trick of the season.

With the vocal home crowd now clearly enjoying themselves and Connor Wilkins and Wright spurned chances to add a fifth before the final whistle blew. The result coupled with the news that Corinthian had demolished K Sports 4-1 at home meant it was The Hoops who leapfrogged Becks into top spot.

Assistant manager Billy Walton summed up the mood in the Beckenham camp when speaking afterwards: “The conditions were hard to play football for both teams. But we just made too many mistakes against good forwards. We’ll sit down, analyse the game and work out what we need to sort out.

“Today is a bad day at the office, but this (title race) will go all the way to the last game of the season. You’ve got to respond and start again. So although we’re down, we’re not out. We’re very much in it. We’ve still got a great chance of winning promotion,” he said.