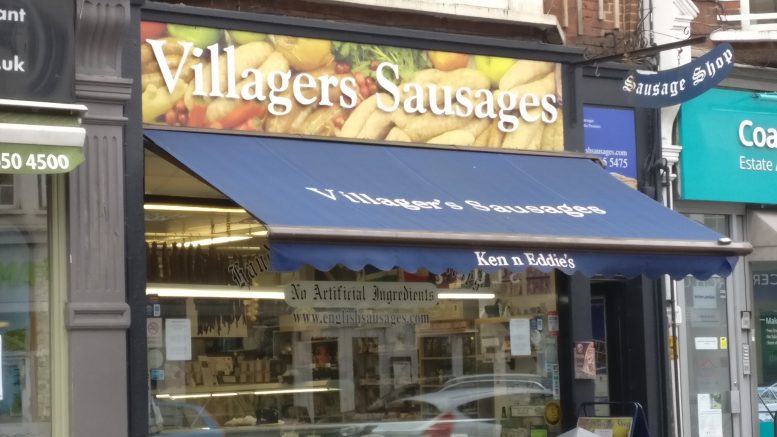 Villagers Fine Sausages, an independent sausage shop run by founder and owner Ron Etheridge, has been serving the Beckenham community for almost 25 years. News in Beckenham has been finding out more.

Villagers Fine Sausages, which is located on Beckenham High Street, first opened its doors back in October 1995. Butchery was certainly not what you’d call a family tradition for Ron.

Speaking to News in Beckenham, he said: “I grew up in a male dominated old fashioned household with three brothers and everyone was into football and getting their hands dirty fixing cars and motorbikes.

“I loved cooking in the kitchen with my mum and developed a love for rugby so the term ‘Black Sheep’ certainly comes to mind.”

After finishing school Ron went on to catering college and worked in a number of restaurants. However, he found this wasn’t for him. “There was no interaction and it all just felt like a conveyor belt,” he said.

In 1988 Ron landed himself a job developing new sausages for a shop in Greenwich. After realising his passion, he decided to go it alone in 1993.

Ron added: “With a little backing from the bank and some help from an old friend I opened Villagers Fine Sausages, despite being told by many that I was on the wrong side of the road.”

The rest as they say is history and Villagers Fine Sausages has been a popular staple of the Beckenham High Street scene ever since. The shop has even featured on TV shows such as The Big Breakfast and Loose Women.

Villagers Fine Sausages offers more than 200 varieties of sausages and other meat products all of which contain no artificial colours or additives. Their most popular sausages are the Ken’N’Eddy’s, a spot-on replica of the old famous Kennedy’s sausages from days gone past.

There are also over 30 gluten-free, six vegetarian and two vegan sausages available as well. Where possible, all of the meat is sourced locally.