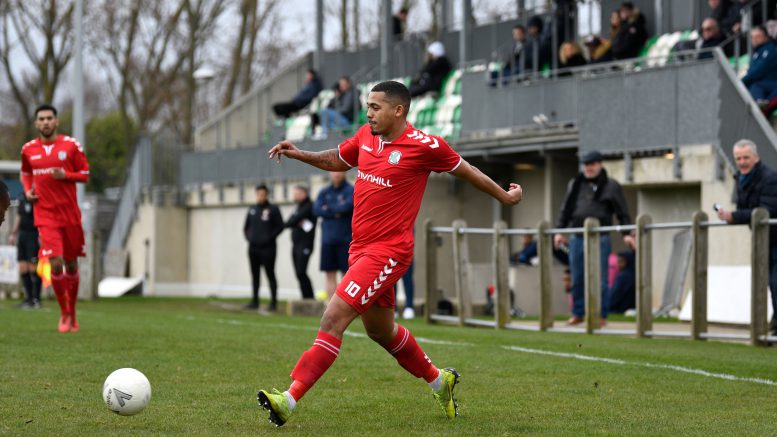 Three goals in seven minutes either side of the break saw Beckenham Town solidify their position atop the SCEFL Premier Division with a deserved 3-0 win away at mid-table Welling Town. A first of the season for defender Rob Carter, a beauty from captain Luke Rooney and a tap-in for young forward Steve Townsend, ensured the league leaders departed Bayliss Avenue with all three points.

Becks boss Jason Huntley decided to maintain the back four that had performed so admirably in midweek, choosing to play Archie Johnson alongside Rooney and former Welling Town player Harvey Brand in midfield. In contrast, Boots boss Danny Wakeling – having used his programme notes for some stinging criticism of his side’s most recent performance, handed home debuts to Chris Sholu and Steve Ita whilst also welcoming back midfield playmaker Adam O’Neill.

The first half an hour saw few clear chances. Beckenham were on the front foot for the most part – forcing a series of corners – but had little to show for their possession. Gary Beckett cleared to deny them after one of their most penetrating moves and Brand got under a headed chance, unaware that Ben Gorham was better placed just behind him. At the other end Malik Ouani shot wide. The best opportunity fell to Becks’ striker Dominic Ogun. Played in cleverly by Ryan Hall’s ball through the centre, Ogun bore down on goal for what seemed certain to be the opener only to shoot tamely, allowing Welling goalkeeper Lee Kidman to block with his legs.

Just after the half an hour mark, the pattern of the game changed. Having picked up a knock, Beckenham full-back Jamie Brown was unable to continue. Junior Kaffo came on in midfield with Johnson reverting to the left-back role he has owned for much of the campaign. Within minutes the two linked up, Johnson bursting forward down the left, cutting across a defender inside the area before shooting just wide.

Tails up, the league leaders were moving through the gears and gaining the ascendency. On the opposite flank, right-back Kiki Oshilaja and Brand suddenly interchanged passes before playing Ogun in behind The Boots backline. But with Townsend in the centre screaming for the early delivery, the former AFC Croydon player delayed before wasting the opportunity with something that fell somewhere between a cross and a shot but was ultimately neither, the ball instead running safely out for a goal-kick.

Three minutes before the break, the deadlock was broken. Good control by Townsend saw him win a freekick wide on the left. Rooney’s set-piece was delivered low and hard into a crowded area and the ball was turned home from close-range by Carter – the central defender wheeling away in delight at his first goal of the season.

Moments later it was almost two. Rooney fed Johnson who again drove forward before flashing a ball across the area. Through a crowd, it arrived at Townsend but his weak shot allowed Beckett to clear off the line. With Becks sensing the knockout blow, Ogun was unlucky not to be awarded a penalty after tumbling with Ryan Mahal inside the area. The former VCD Athletic defender was seemingly more intent on playing his opponent than the ball having gotten on the wrong side of his man only to somewhat generously be awarded a freekick by the referee. Moments later, Rooney blazed over when Ryan Hall was perhaps better placed, but it was a rare error of judgement by the captain who was playing well.

Just how well, became apparent within two minutes of the restart. Kaffo did well to find Ogun who in turn moved it on to his skipper. Rooney advanced across the D, and with the Welling defence slow to close him, unleashed a thunderbolt from the edge of the box that flew into the top corner. Two minutes later it was effectively game over. Gorham hung an inviting cross into the area and with Kidman hopelessly exposed Brand’s looping header crashed off the underside of the bar before dropping to Townsend who poked home from a yard out for number three.

The home side’s response was a double substitution with O’Neill – clearly still finding his feet after being out for some time through injury – and Peter Ojemen – who had come off much the worse following an aerial clash with Hall – replaced by Joel Thompson and Jack Bancroft respectively.

But already The Boots were looking a beaten side and it was only an uncharacteristic error by Beck’s keeper Michael McEntegart that almost handed Danny Wakeling’s side a way back into the contest. The Aussie shot-stopper’s throw-out striking the back of an unintended target and instead falling to Hassan Oshilaja only for the talented Welling midfielder to rush his effort and shoot wide from a dangerous position.

Beckenham brought on Shameek Farrell for Townsend and inside sixty seconds he was played in by Rooney only to check back before his wild effort on goal went out – for a throw-in! The same player then shot wide after interlinking well with Rooney and Kiki Oshilaja down the right. In between, Ogun glanced a header just past Kidman’s right-hand post. But in truth, with the points secured the game was becoming scrappier with players on both sides suddenly guilty of sloppy errors.

Looking for a spark, Becks replaced Hall with the tricky Stefan Cox and within a minute the substitute was teed up by Brand only to snatch at his shot and put it wide. Brand then had a go himself, wriggling past three challenges before dragging his effort just beyond the far post from edge of the area. Rooney’s audacious chip then drifted off-target, Cox had another effort deflected wide for a corner and after some accomplished play by Gorham, Farrell bent another effort just off-target.

The match was petering out to a finish. But there was just time for some late drama when Welling’s Oshilaja responded to an initial sin bin decision by spitting invective at the referee. The official was left with little choice but to dismiss him. Furious at both decisions and having by now lost all composure, the Welling dynamo stormed off murmuring a string of expletives as he departed.

For The Boots, in their first season at this level after coming up as First Division champions, it was a disappointing end to a forgettable day in a season that on some levels can already be judged a success. For Becks, it was both a third win on the bounce and a third clean sheet in a row as they strengthened their grip on the top spot ahead of Tuesday night’s trip to near neighbours Glebe.