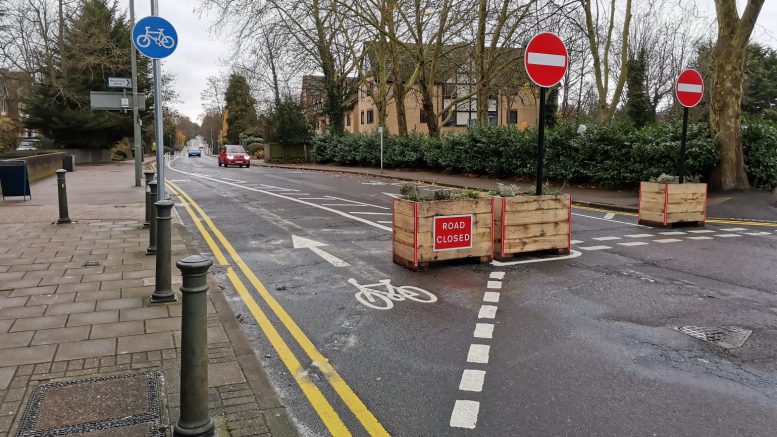 Exactly a month on from the introduction of new one-way traffic measures on Albemarle Road, a large number of Beckenham residents have continued to bemoan the changes; but not all are critical of the scheme.

Local resident, Michelle Gregory, who opposed the move, told News in Beckenham: “The surrounding roads are a constant traffic jam and pollution is terrible. People are using more of the quiet roads to avoid the main roads and are speeding.”

Others have called the scheme “ill thought out”, “infuriating” and “absolute madness”, with many citing increased pollution and congestion on surrounding roads and a lack of cyclists utilising the new lanes, while another resident believes that the measures have “created a problem where there wasn’t one.”

A petition opposing the measures becoming permanent has, at the time of writing, gathered more than 2,350 signatures.

However, not all residents have been so critical, with some in fact welcoming the move. Speaking to News in Beckenham, one such resident, Dan Haque, said: “Hasn’t generally been a great deal of traffic from what I’ve seen. Obviously had teething issues at first but seems more settled now. I’ve grown used to it and quite like it to be honest.”

Another added: “As someone who lives right by Westgate Bridge, I’m loving the bridge being one-way. All that needs to be done is for the lights to be phased better at the end of Albemarle Road.”

The new experimental traffic management arrangements, which have been brought in to create a cycle route connecting Shortlands to Beckenham and to improve pedestrian crossing facilities, went live on November 18.

Bromley Council state that the scheme has been assessed in terms of traffic flow and safety, noting that “the proof of the pudding will be in the eating”.

“Whenever any new scheme is implemented, it will take days or weeks for traffic patterns to settle down and for the highway authority to make final assessments. Council officers will be visiting to monitor traffic in the Albemarle Road area and making necessary adjustments to, for example, traffic light timings at Beckenham Junction, or even making changes to aspects such as the one-way flow of traffic over the Westgate Road bridge.”

Responding to one resident’s concerns, Bromley Council’s Stephen Oliver, said: “For reference the scheme has had an independent Safety Audit however motorists need time to recognise the changes and do not always follow signage etc.

“Having stood at the junction of Albemarle Road and St Georges Road I have not witnessed anyone having problems crossing the road. It is also not a topic other residents have brought up. Traffic congestion on Albrmarle Road has improved since motorists have got used to the changes and since Google Maps has been updated.

“Out of the morning peak traffic from Albemarle Road has appeared to be running smoothly. I would also like to add that residents have started to write in with positive comments about the changes including removing the head on conflicts on Westgate Road Bridge. Also despite the time of year many cyclists have been seen using the route.”

What are your thoughts on the temporary measures? Submit your views via the comment box below or email info@newsinbeckenham.co.uk