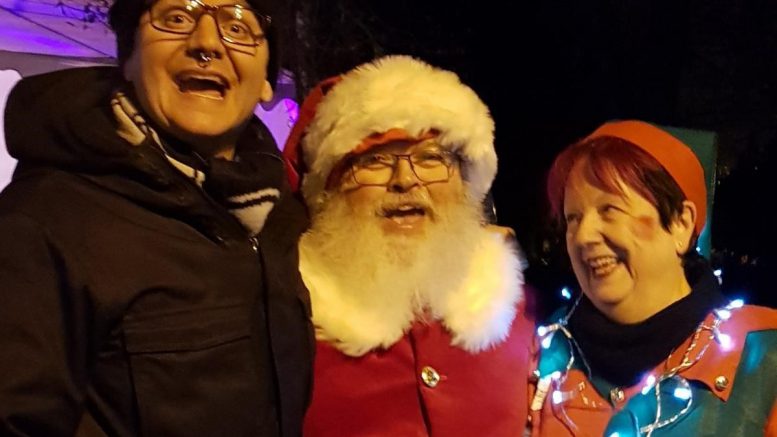 Beckenham residents got into the festive spirit last weekend with the annual Christmas Market on the Green, followed by a candlelit parade, a lights switch on and even a visit from Santa.

The market, organised by the Copers Cope Residents’ Association, included stalls from local produce and craft traders, as well as entertainment on the stage and a primary school choir competition.

Hundreds of people took part in the candlelit parade, which was organised by Beckenham Business Association. Leaving from Croydon Road Recreation Ground, the parade up the High Street culminated on Beckenham Green for the lights switch on by special guest Anna Kennedy OBE, owner of Baston House Manor School and champion of those affected by autism and Asperger’s.

Fairy lights were handed out to people taking part and along the route, with donations being made to Beckenham MindCare Dementia – with more than £150 raised. A rolling road block, courtesy of the local police, marshals from Beckenham Rotary and other volunteers ensured the parade all went smoothly.

This year, as well as lights along the High Street, Beckenham has a Christmas Tree of Light, sponsored by Burger & Bubbles, Beckenham Business Association, AAA Minicabs, MHE Residential and Ronin Marketing.

Beckenham Business Association chair, Jackie Groundsell, said: “We’ve been totally overwhelmed by the generosity of the local community – both business and residential – in giving their time, vehicles, providing free food and drink along the parade route and generally making it the success it was.

“Their support has enabled BBA to carry on this magical tradition, originated by the Copers Cope Area Residents’ Association. A big thank you to everyone who got involved and took part on the day.”