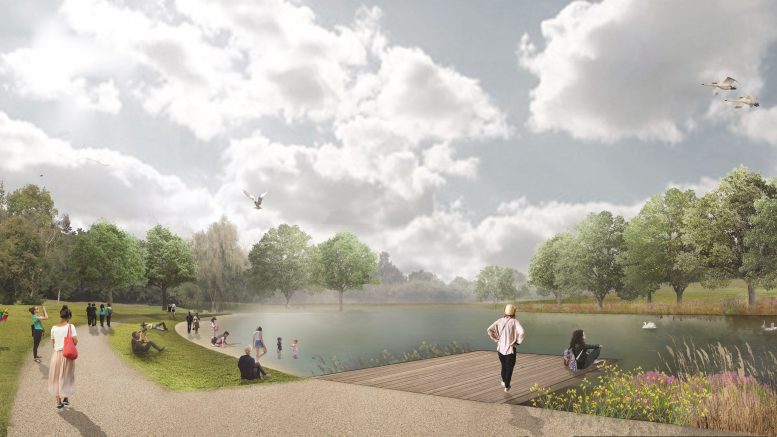 An artist's impression of the new lake at Beckenham Place Park

Mayor of London Sadiq Khan recently announced that Beckenham Place Park was to receive £440,000 in funding as part of his plan to turn the capital into the world’s first National Park City.

The park, which is controlled by Lewisham Council, was one of six winning projects to get a share of the £2million funding pot from the mayor’s Greener City Fund.

The council say the cash injection will be used to plant thousands of new trees as well as support the restoration of the park’s Georgian lake, which will create a new wildlife habitat and be used for open water swimming.

Damien Egan, Mayor of Lewisham, said: “This is really fantastic news. Since the start of the regeneration work in Beckenham Place Park, we’ve already seen a considerable increase in the number of visitors.

“This additional funding will be a significant boost to our plans to conserve and enhance this park, attracting even more people to come and enjoy the natural beauty of the park.”

The park previously received £4.9 million from the Heritage Lottery Fund for redevelopment back in December 2016 and since then a range of plans have been announced that include a mounded garden, changing the stable block to include a café and an education room, the relocation and expansion of the car park and a new wetland area.

However, some regular park users have raised concerns over the effect on wildlife and natural habitats. Local dog walker, Sophie Phipps-Tick, said: “As a daily park user for the last ten years it is heartbreaking to see this much-loved park being systematically destroyed.

“So many healthy trees have been felled; natural habitat and established ecosystems have been bulldozed and cycle tracks are now destroying the ancient bluebell woods.”