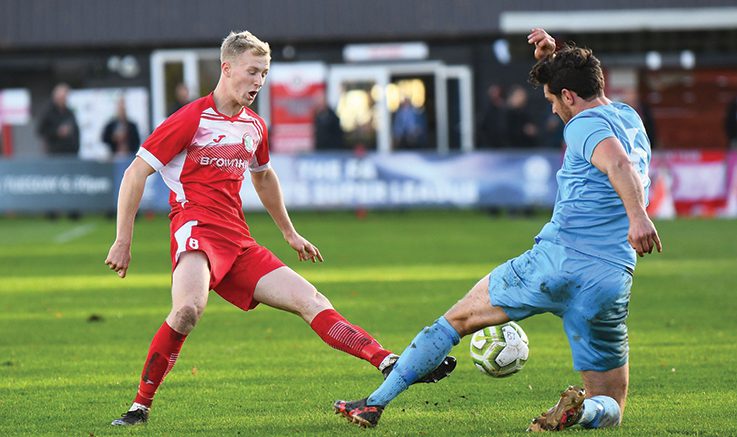 With a second pandemic-induced national lockdown seemingly imminent, Becks made it three home wins in a row with an accomplished victory over a spirited Lordswood side at a rain sodden Eden Park Avenue.

The game’s pivotal moment came just after the half-hour mark when a good move involving skipper Harvey Brand and Townsend released Aderonmu only for him to be unceremoniously clattered by Lords keeper Ryan Turner – who quite rightfully saw red. Down to 10-men and without a substitute goalkeeper, the visitors turned to pint-sized skipper Jason Perry to don the gloves. He performed heroically (earning the admiration of the home fans who cheered him off at the end) but despite having to wait until twenty minutes from the end for the deadlock to finally be broken, Becks ultimately ran out deserved victors.

With usual number one Michael McEntegart self-isolating, player coach Phil Wilson starting in goal was the major lineup change for the hosts. The veteran keeper would marshall his area well and make a very good stop in either half, but for the most part it was Beckenham who were in control.

After just two minutes, winger Tyrone Pink was played in through the centre but appeared to lose his footing and had his shot tipped over. There were penalty appeals waved away at either end and Becks almost took the lead when Brand’s low cross from the right appeared destined to gift Townsend the opening goal but a combination of goalkeeper and defender thwarted him – the young attacker unlucky to receive a booking when challenging for the follow-up. Aderonmu and Brand both then forced corners before combative midfielder Bertie Valler was also booked. Then came the pivotal sending-off – Ryan Hall’s subsequent free-kick being deflected for yet another corner. Defender Ike Robertson then had a goal disallowed for a marginal offside following a quickly taken free-kick – Ike soon became the third Becks player to see yellow. Archie Johnson fired over, Aderonmu and Townsend both had shots saved and Hall shot wide – but by half-time it still remained goalless.

Despite asserting their growing dominance, frustration was increasing as the second-half progressed. Johnson limped off after picking up an injury and Junior Kaffo made way for the more attack-minded Danny Phillips. With twenty minutes to go, substitute Jamie Brown found some space and fired home off the inside of the post to provide the crucial opener. Pink then had a shot cleared off the line and Aderonmu a volley saved before Brown cut in from the left and teed up Aderonmu who doubled the lead from the edge of the area.

Recent signing Charlie Busby replaced Valler in midfield and there was still time for Perry to concede a penalty by fouling Aderonmu – the spot-kick being duly dispatched into the bottom left by Townsend. Joy then turned to despondency for the scorer when he was shown his marching orders for a second yellow after being adjudged to have been guilty of ‘simulation’.