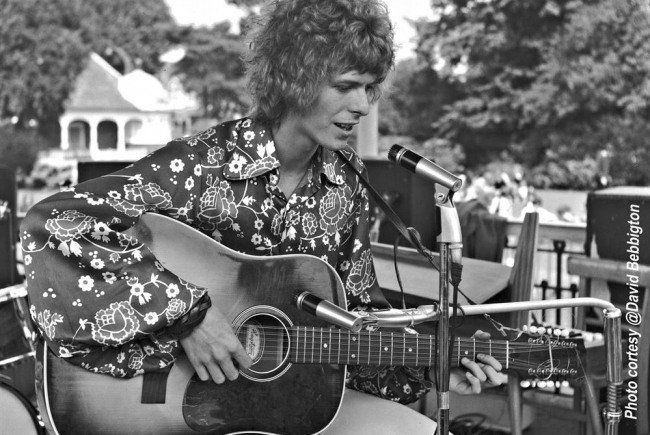 The iconic Bowie bandstand has officially received Grade II listed status, 50 years to the day after David Bowie performed at the first Growth Summer Festival back in 1969.

The bandstand, which sits in Croydon Road Recreation Ground, was awarded Grade II listed status by the Department for Digital, Culture, Media and Sport on the advice of Historic England.

Although born in Brixton, at eight years old Bowie moved to Bromley with his family and as an adult he lodged on Foxgrove Road, Beckenham, with Mary Finnigan, his landlady and later his lover.

The hope was to raise money for apermanent base for his and Finnigan’s Beckenham Arts Lab project, which began life as a folk club in the backroom of the nearby Three Tuns pub.

The one-day festival was free, emulating Woodstock’s style and feel with its emphasis on freedom of expression for artists and musicians.

The bandstand was the centrepiece of the day and the stage from which the young Bowie performed to an audience of a few hundred people.

Thought to be the first of its kind in the UK, the festival inspired Bowie to write Memory of a Free Festival, a seven minute song for his second album released later that same year, in homage to the day.

Bowie spent some of his most creative early years in Beckenham, with his landlady Mary Finnigan claiming he composed many songs whilst living under her roof. It has even been suggested that Bowie may have penned the lyrics to Life on Mars from the steps of the bandstand.

The bandstand itself was built in 1905, to the design of the McCallum and Hope Iron Foundry and is thought to be the only bandstand from this foundry still standing in Britain.

Wendy Faulkner, who organises the Bowie Beckenham Oddity festival each year, and has been tirelessly campaigning and fundraising to get the bandstand restored, told News in Beckenham: “I’m over the moon about the bandstand being listed , this beautiful and iconic place will now finally get the attention it deserves.

“Since the announcement listing we have seen people of all ages visit and show genuine interest about the Edwardian bandstand.

“It’s lovely to think that this bandstand will be around for many generations to come. This is a great way to celebrate 50 years since he performed there.”

Duncan Wilson, chief executive of Historic England, added: “Walking past this typical yet characterful bandstand, you probably wouldn’t expect it was once the stage for a young man who would become one of the most iconic musicians of the 20th century.

“It is a rare survival from a historic iron foundry in its own right, but its significance as a site that inspired David Bowie shows us how powerful our historic places can be and how important it is that we protect them so they will continue to inspire people for years to come.”