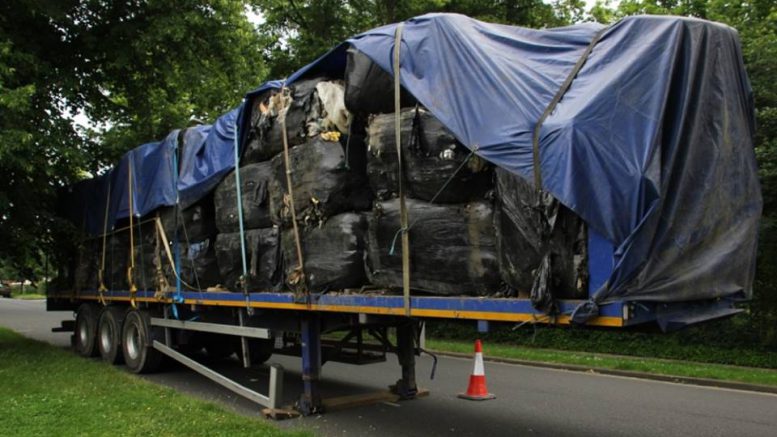 Bromley Council is offering a £500 reward for information following the discovery over the weekend of four 40ft abandoned articulated trailers full of dumped rubbish on two Beckenham streets.

Three of the trailers are parked in Copers Cope Road with the fourth left on Worsley Bridge Road. The waste has been baled or wrapped in black plastic wrapping and left on the trailers which are all in a poor state of repair.

The final costs of the specialist removal and disposal operation have not yet been established but it is believed they will be in excess of £80,000.

Witnesses who may have seen the driver of the lorry are asked to contact the council, with the reward available for information which leads to a successful prosecution.

Councillor Kate Lymer, executive councillor for public protection and enforcement, said: “This deliberate act of fly-tipping is a form of organised crime. People are paying good money to these cynical criminals in the belief that they will dispose of their waste but they end up dumping it instead and keeping the cash for themselves – which can amount to thousands of pounds.

“Bromley residents are left to foot the clean-up bill via their council tax through no fault of their own. We need your help to catch the perpetrators and if anyone remembers seeing anything, no matter how insignificant it seems, please get in touch. Please keep a look out for suspicious behaviour in future and call the police straightaway if you think you’ve seen something dubious. We are determined to put a stop to this.”

The investigation is continuing, with CCTV being studied and local residents are being asked to contact the council if they did witness something which may have been suspicious at the time.

A heavy goods vehicle cab has also been found in Worsley Bridge, which is not driveable but witnesses are being asked whether they know where this vehicle may have been and who has been driving it.  The vehicle registration of the white MAN D20 cab is BX56 LSN.

The weight of the trailers are so heavy, that they have damaged the road surface and will require specialist recovery, especially as they are in poor condition and not in a roadworthy state.

Residents are also being warned they need to properly check the credentials of anyone being employed to remove unwanted items or waste from their home.  Legally, any trader responsible for removing waste from a property needs to be a registered waste carrier and hold a valid waste carrier’s licence.  Whilst a business can be fined up to £5,000 for not registering, householders can also be prosecuted for using an unlicensed waste carrier.

Fly-tipping problems can be reported on the council’s website at www.bromley.gov.uk/report