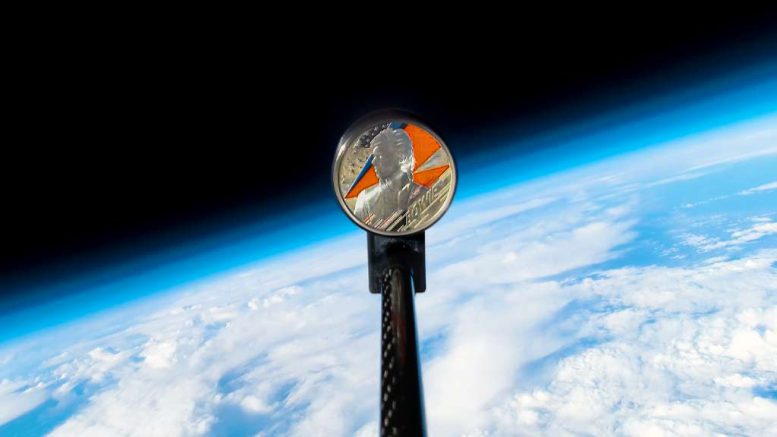 The Royal Mint has launched a commemorative coin celebrating the career of one of Britain’s most enduring musical icons – David Bowie.

It is the first time that a UK coin has been sent into space, and celebrates the intergalactic legacy of former Beckenham resident David Bowie and his hits, which include Starman, Life on Mars? and Space Oddity.

The coin, which reached 35,656m and orbited the Earth’s atmosphere for 45 minutes before safely descending back to Britain, will now be offered as a competition prize for David Bowie fans via The Royal Mint’s Facebook page.

The David Bowie commemorative coin is the third in The Royal Mint’s ‘Music Legends’ collection, and follows coins in honour of Queen and Elton John. The latest coin celebrates rock’s definitive chameleon with a design inspired by an image of David Bowie from his time spent living and recording in Berlin. The coin’s design includes the iconic lightning bolt motif from Aladdin Sane, and captures Bowie’s career journey.

Using the latest innovative technology and manufacturing techniques, the lightning bolt that features on a number of the special edition coins appears laced with stardust to create a glitter effect.

Clare Maclennan, divisional director of commemorative coin at The Royal Mint, said: “We are thrilled to unveil the third coin in The Royal Mint’s ‘Music Legends’ series, honouring the intergalactic legacy and career of David Bowie.

“In recognition of Bowie’s first hit single Space Oddity, we felt it was fitting to send his coin into space and celebrate the Starman in his own pioneering fashion. David Bowie’s music has inspired and influenced generations of musicians and we hope this commemorative coin will be cherished by fans around the world.”

Born in Brixton, South London in 1947, Bowie started life as David Robert Jones. By the time he was 19 he had taken on his iconic name and began pursuing a career in pop music. Five days ahead of the Apollo 11 launch in July 1969, Space Oddity was released in the United Kingdom. The single, which was released while Bowie was then living in Beckenham, reached number five in the charts, making it Bowie’s first success as a writer and performer.

You can view the full collection on The Royal Mint’s website www.royalmint.com/DavidBowie